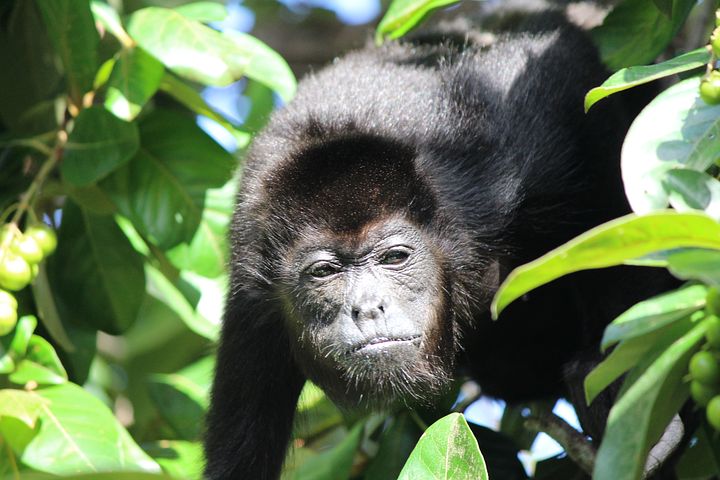 I am a monkey. Howler monkeys in Costa Rica. Many of us know these animals only from the zoo or behind cages. Here in Costa Rica the last zoo was closed years ago.  This means that all the animals, especially howler monkeys, can only be seen wild. By the way, the genes of the monkeys are about 94% identical to those of us humans. So we shouldn’t pride ourselves to much about it…

when you are still in bed you are often awakened by their roar. Seems they were screaming “Come on, it`s time to get up!”. In the afternoon, on the way to the beach, you can almost always watch the monkeys climbing from tree to tree in a very delicate way. And it is particularly cute when the monkey mummy is carrying their baby on her back – I could observe this for hours! The animals are totally peaceful and definitely not shy. And best of all, every now and then, they visit us in our Costa Rica hotel garden, and they give not only the guest but also us a lot of fun.

Here you get some information about these nice companions, who you will surely meet in your next Costa Rica holiday:

Howler monkeys – Latin name ‘Alouatta’’ – stem from the genus of the primates and from the family of the atelids. The animals are distributed in the South and Central American continent, from southern Mexico to northern Argentina. Their living environment is generally the forest. It seems that the animals are less concerned about the temperatures or the type of the forest but more about having enough trees and vines for climbing and swinging. Of course there should also be enough plants, since the monkeys are pure herbivores whose main food consists of leaves. Depending on the season, they do also allow themselves flowers or fruits.

The next time you are in the jungle in Costa Rica and hear a loud roar, especially in the morning,

you can already keep your eyes open and look for a monkey. If you see one and he has a tail length of 60 to 90 centimeters and a weight of 4 to 10 kilograms, you can be quite sure that it is a howler monkey. Another feature is the rough and long coat and a coloring ranging from yellow-brown to red to black.

The howler monkey are day-active tree dwellers, where they also spend the majority of their lives. They are also very skillful climbers and their gripping tail can even be used as a fifth hand. It is so strong that the animals can catch themselves after a jump from a branch only with their tail.

The howler monkeys live in groups of five to twenty animals. They have strict hierarchies. While the males, which are much larger than the females, are allowed to stay in the upper crowns of the tree, the females must be content with the lower places. Of course there are also battles among each other.  Many young animals leave their family group when they are grown up, when they are aware that they would be chanceless in the hierarchy. The roaring of the monkey is mainly used for communication and to draw attention to themselves.

Here in Costa Rica the animals are apart from isolated natural enemies such as the big cats or birds of prey. They can climb easily through the large trees and lead a calm and relaxed life. We are so glad that the monkeys can continue visiting us in the hotel Costa Rica and make us laugh a lot!

Pura Vida – back to the start.